Arrive at Colombo International Airport, where you will be met by our representative. Transfer to Negombo, Marawila.  Evening at leisure.  Dinner & Overnight Accommodation at Negombo, Marawila OR Colombo.

After breakfast proceed to Anuradhapura. En route visit Pinnawala Elephant Orphanage, where over 70 Elephants Ranging from little babies to adults are cared for. Thereafter visit Yapahuwa & visit Aukana Buddha statue. The rock fortress complex of Yapahuwa is situated in the Wayamba province of Sri Lanka. Yapahuwa served as the capital of Sri Lanka in the latter part of the 13th century (1273-1284), by King Buvanekabahu. Built on a huge rock boulder in the style of the Sigiriya rock fortress, Yapahuwa was a military stronghold against foreign invaders.  Aukana Buddha statue – 5th century AD and a man, a very special sculptor, takes his first blow at a jungle rock face a few miles away an enormous tank or lake is being constructed and the king, Dhatusena, is in Anuradhapura where Buddhism unites the Singhalese people in a common purpose and gives them a vision of this life and those to come.  Dinner and overnight Accommodation at Sigiriya or Dambulla.

After Breakfast Proceed to Sigiriya. Climb the 5th century Sigiriya rock fortress which is a world heritage site, built by King Kashyapa (477-495 AD). The ‘Lion Rock’ is a citadel of unusual beauty rising 200 meters from the scrub jungle. The rock was the innermost stronghold of the 70 hectare fortified town. A moat, rampart, and extensive gardens including the renowned water gardens ring the base of the rock. Visit the world-renowned frescoes of the ‘Heavenly Maidens’ of Sigiriya, which are in a sheltered pocket of the rock approached by a spiral stairway. These frescoes are painted in earth pigments on plaster. Elephant back ride through the Jungle of Habarana – A very popular excursion for visitors to this area is elephant back rides through the very pretty landscapes of Habarana where the forest is interspersed with villages and lakes.   Afternoon Sightseeing of Polonnaruwa – theMedievalKingdomfrom the 11th to the 13th century. Ethnic harmony prevailed between the Sinhalese and the Tamils during this period. Buddhist andHinduTempleslocated in the same complex and many other ruins symbolizes this fact.  The Palaces, Huge granite sculptures and the massive tanks and complex irrigation systems built by the Great Kings conveys the extent of development that existed in this middle history period Return to Hotel for dinner and accommodation.  Dinner and overnight Accommodation at Sigiriya OR Dambulla.

After breakfast, proceed to Kandyvia Dambulla rock temple which was built by king Walagambahu in the 1st century B.C. and it is a World Heritage Site.  It is the most impressive of Sri Lanka’s cave temples.  The complex of five caves with over 2000 sq. metes of painted walls and ceilings is the largest area of paintings found in the world.  It contains over 150 images of the Buddha of which the largest is the colossal figure of the Buddha carved out of rock and spanning 14 meters.  Matale Spice Garden– The area around Matale has a favorable climate for the cultivation of many varieties of spices. There are quite a few ‘SpiceGardens’, which are squarely aimed at tourists where a guided tour around a spice plantation usually followed by an invitation to purchase some raw spice products. For those interested in spices as used for Oriental cooking and curries in particular, this will be an opportunity to buy spice products at relatively cheap prices.  Evening visit the Dalada Maligawa Temple& also witness a typical Kandyan cultural performance.  Dinner and overnight Accommodation at Kandy

More sightseeing of Kandy – About 64 km southwest of the town center at Peradeniya on the Colombo highway, close to the banks of the Mahaweli Ganga, these gorgeous gardens were first planted and laid out for King Kirthi Sri Rajasingha (1747 – 1780) and cover some 60 ha (150 acres) of trees, lawns and flowering shrubs, including a 20 ha (50 acre) arboretum of more than 10,000 trees. Under British rule, the royal park became a botanical garden in 1821 and is the largest of Sri Lanka’s three main botanical gardens. Here exotic crops such as coffee, tea, nutmeg, rubber and cinchona (quinine) – all of which later became important to Sri Lanka’s economy – were tested. Sights include a palm avenue planted by the British in 1905. And also visit upper lake drive and market square.  Dinner and overnight Accommodation at Kandy.

After breakfast transfer to Ratnapura/Kalawana set against the lofty mountain in the tranquil, healthier jungle demarcating the Tea and Paddy terraces at Kalawana inSri Lanka’s South West region. Singharaja forest reserve is the most famous rainforest of the country. This tropical rain forest is a living heritage. This is a very good place to see many endemic birds such as Ceylon Lorikeet, Layard’s parakeet, Jungle and Spur Fowl, Ceylon Wood Pigeon, Grey Hombill, Spotted wing Thrush, Rufous and Brown- capped Babbler, Ashy-headed Laughing Thrush, Ceylon Blue Magpie, White Headed Starling, Ceylon Hill Mynha, and Legge’s Flowerpecker. The clear cut roads in to the jungle provide easy access to the forest.  Dinner and overnight accommodation at Ratnapura OR Kalwana.

After breakfast proceed to Tangalle.  Full day at leisure by the beach/ relax by the pool.  Dinner and overnight accommodation at Tangalle.

Transfer to preferred beach resort, via Dutch fort in Galle, Glass bottom boat ride in Hikkaduwa OR boat ride on the MadhuRiver.

Please note all vehicles we use are generally Japanese Toyota, Nissan, Mazda or Mitsubishi cars in very good condition which are 5 to 10 years old. These are generally the vehicles used in the industry inSri Lanka. However in the event if a client requests for a new car than this (0 to 5years old) we would charge a supplement as follows; 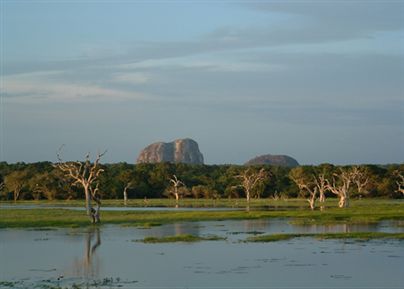