Visit one of the world’s most romantic and enchanting capitals rich in famous landmarks, monuments and inspirational museums. Admire spectacular panoramic views from the Eiffel Tower, walk the elegant boulevards, shop in the exclusive boutiques along Champs Elysees and stay in one of the many amazing hotels in Paris. 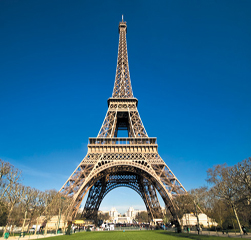 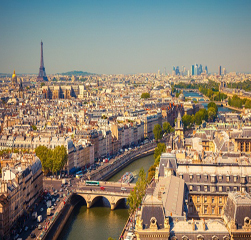 • History: In 700-500BC the Celtic Gauls arrive in France. In 58-50BC Roman Emperor Julius Caesar defeats the Gauls and France becomes part of the Roman Empire until 476AD. French was ruled by kings for many centuries until the storming of the Bastille during the French Revolution in 1789. Then Napoleon becomes Emperor of the French Republic until he is sent to exile.

• France is situated in Western Europe, 1 hr flight from London/England, 5.5 hrs from New York/USA. On the France outline you will see the little island of Corsica, which belongs to France, also in the French flag colors.

• The western-european country shares borders with Belgium to the North East, Germany and Luxemburg in the East as well as with Switzerland, Italy to the South East. The Pyrenees, a mountain range to the South of France, form a natural border between Spain and France. The highest mountain in France is the Mont Blanc, that is 4,810m high and stands at the border between France and Italy.

Mainland France is divided into 27 regions and these into 101 departments. The Mediterranean island of Corsica belongs to France too as you can see in the outline above. Of the 101 departments there are also 5 ROM (regions d’outre mer or overseas regions) also belonging to France: French Guyana in South America, Guadeloupe and Martinique in the Caribbean, La Reunion and Mayotte in Africa in the Indian Ocean.

• Paris: Eiffel Tower, Notre Dame, Louvre (which you can see in the image to the right), Montmartre, Arc de Triomphe, river Seine and many other great attractions

• Corsica: in the Mediterranean sea

• Provence for lavender fields and old historic towns like Avignon

There are so many exciting places, historic villages, ancient Roman ruins and majestic castles to visit, please make sure you come back to this site again, as we will add more information on places to visit here soon.

French is the official language in France and it is also the second major language in Europe. The Romanic language comes from Latin and is today the second most studied language after English and spoken by more than 300million people around the world as first or second language. 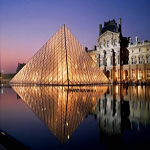 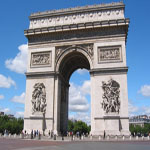 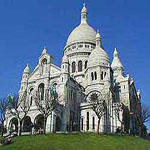 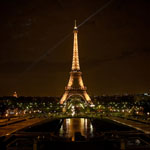