From Cyprus to Morocco Tour

Day 1: Depart via Cairo to Casablanca
Arrive Cairo, transfer to hotel for overnight

Arrive in Morocco’s largest city, where you are met by your representative and transferred to the hotel. Originally settled by the Berbers in the seventh century, the port city is a timeless blend of ancient traditions, French-inspired architecture and modern-day hustle and bustle. Meals: B D

Day 3: Casablanca/Meknes/Volubilis/Fez
Start the day by exploring Casablanca’s most important site, the Hassan II Mosque, which houses 25,000 worshippers. Its minaret is the tallest religious structure in the world. Afterward, drive to the city of Meknes, a UNESCO World Heritage Site built in the seventeenth century by the powerful sultan Moulay Ismail to rival the court of French contemporary Louis XIV. Following lunch, your sightseeing continues to Volubilis, also a UNESCO World Heritage Site and home to Morocco’s largest and most well-preserved Roman ruins. With its soaring arches and basilicas, Volubilis’ skyline is peppered with examples of Roman architecture — though its greatest treasures are the excellently preserved mosaic floors. At day’s end, arrive in Fez. Meals: B D

Day 4: Fez
Spend the day today discovering Fez. Step back in time to the Middle Ages as you visit one of the most ancient and untouched city neighborhoods in the world, Fez el-Bali (“Old Fez”), the cultural heart of Morocco. Take your pick from and meander in some 9,000 car-free narrow lanes, alleys and souks that comprise the labyrinth of the city’s old quarter, originally founded in the eighth century AD by Moulay Idriss I. Take in the sights and sounds of locals conducting their day to day business and merchants selling spices and goods. The imperial capital was a center of medieval learning and at its heart remains the Al Karaouine university, originally founded as a madrasa in 859. Pause at Nejjarine Square, with its beautiful fountain with elaborate mosaic tilework. After lunch, discover Fez el-Jedid (“New Fez”), built by the Merinid Dynasty in the thirteenth century. Fez el-Jedid is home to the Mellah, the old Jewish quarter, which boasts traditional Jewish architecture of wrought iron–decorated windows and splendid carved wood balconies.| Meals: B D

Day 5: Fez/Rabat
After breakfast, drive to Rabat, the capital of Morocco. After settling in to your hotel, set off to explore the city’s highlights, including its superbly preserved Moorish relics, such as the twelfth-century Hassan Tower, the incomplete minaret of a great mosque built by Yacoub el-Mansour. View the mausoleum of Mohamed V, founder of modern Morocco, and visit Oudaya Kasbah, built on a bluff overlooking the Atlantic. Note the kasbah’s gate, one of the most beautiful surviving ones in the Moorish world. Once inside, explore a delightful Andalusian-style garden, complete with a fountain and sweet-scented orange trees. Beyond the city walls are the remains of the ancient city of Sala.| Meals: B D

Day 6: Rabat/Marrakech
This morning, drive to Marrakech. Founded in 1062, Marrakech was once the capital of an empire that stretched from Toledo, Spain, to Senegal. Also known as the “Red City” or “Pink City” due to the distinctive hue of the local earth used in the construction of its many brick buildings, Marrakech is a city of labyrinthine alleyways, secluded palaces, museums, mosques and markets. | Meals: B D

Day 7: Marrakech
Spend the day discovering mysterious, glorious Marrakech, starting at its ancient medina, the old walled section of the city. Visits include the Saadian Tombs, displaying intricate stucco and Granada-style carvings; the Dar Si Said, one of the most beautiful palaces and the home to the Museum of Moroccan Arts and Crafts; and the Bahia Palace, the residence of the grand vizier Si Ahmed Ben Moussa. Stop at the twelfth-century Koutoubia Mosque, with a minaret considered the most perfect Islamic religious structure in North Africa. Afterward, stroll through the labyrinthine souks and the fabled Djemaa el-Fna square, with its fire-eaters, mimes, snake charmers and street musicians performing at every turn.| Meals: B D

Day 8: Marrakech
Continue exploring Marrakech, starting by visiting the beautiful gardens dotting the city. One of the most lovely are the Menara Gardens, which date to the twelfth century and are set among extensive orchards and olive groves. At their center is a rectangular pool with a fabulous view of the Atlas Mountains. From here, continue to Majorelle Garden, originally designed in 1924 by French artist Jacques Majorelle and now owned by famous couture designer Yves Saint Laurent. Marvel at the garden’s exotic plants, such as bamboo, cacti, bougainvillea and palms, and take in the tranquil streams and fish-filled pools peppered throughout. The rest of your day is at leisure, perhaps for last-minute shopping or sightseeing at your own pace.| Meals: B D

Day 9: Marrakech/Departure
After breakfast, transfer to the airport to board your domestic flight to Casablanca and onward connection to Cairo. Meet and assistance upon arrival at Cairo airport, transfer to hotel for overnight stay

Optional: Possible to stay additional nights in Cairo to see the Pyramids, Museum and other sites. 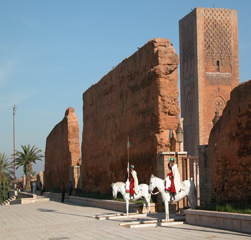