The local route of the Old City is a tour to the churches of Lefkosia (Nicosia). This stroll can be made on foot since the streets are narrow and very picturesque, ideal for walking.

The Cathedral of Agios Ioannis tou Theologou, located next to the Archbishop Palace and opposite the Pancyprian Gymnasium, has a very rich collection of frescoes of the 18th and 19th centuries. The next stop will be the Byzantine Museum of the “Archbishop Makarios III” Foundation, located precisely next to the Cathedral. Amongst its wonderful exhibits also lie parts of the mosaic of the church of Kanakaria which date back to the 6th century AD. The church of Panagia tis Chrysaliniotissas is the most significant Byzantine church in Lefkosia and could not be excluded from the walk. At the same time, the church of Αgios Kassianos located very near to Panagia tis Chrysaliniotissas is a church of the 18th century. The church of Panagia tis Faneromenis was built in 1792 and its grandeur is unique. The church of Τimios Stavros tou Missirikou dates back to the years of the Venetian rule while it was converted into a mosque under Turkish rule. The church of Agios Antonios dates back to the 18th century and has a particularly significant wood-carved iconostasis and a carved stone bell tower. The last stop of this route is at the church of Αrchangelos Michael tou Tripioti renowned for its beauty; in its interior lies an icon of the 15th century which is influenced by Italian painting. 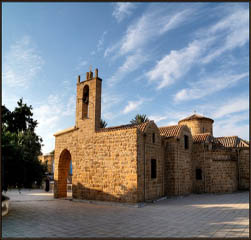 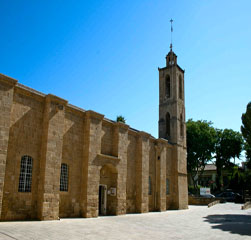 The Mediterranean Beach Hotel is located on the southwest coast of Cyprus on the Bay of Limassol. The hotel is set in landscaped gardens looking out over a blue flag sandy beach and has a commanding view of the hotel’s split level swimming pool, terraced gardens and the Mediterranean Sea. It is a 10 minute drive, approximately 8 kilometres, from the town centre of Limassol which offers visitors all the facilities of a major town. The hotel itself is surrounded by tourist amenities with shops, restaurants and bars and just 40 minutes drive away are two major golf courses. Larnaca International Airport is located 63 kilometres from the hotel and Paphos International Airport is 60 kilometres away, both approximately a 45 minute drive. The Mediterranean Beach Hotel offers a wide variety of accommodation with inland, pool or sea views and caters for families and couples of all ages. There are six restaurants offering fine or casual dining, three bars, a snack bar, full conferencing facilities, outdoor and indoor swimming pools, a health club with gym and spa facilities and a sandy beach.

Athena Royal Beach Hotel is an adult-focused, four star, waterfront hotel in Kato Paphos. Places of archaeological interest, restaurants, bars and shops are located at a convenient short distance. A few metres away from the hotel entrance is a bus stop and taxis are always available. Parking in the hotel car park is free for guests.

The resort is situated 15km away from the Paphos airport and 140 km from Larnaca airport. Two excellent golf courses are within a short driving distance. All the rooms offer large balconies with majestic views of the sea or of the hotel’s extensive gardens.

The leisure facilities of this hotel comprise 3 freshwater swimming pools, indoor and outdoor Jacuzzis, a floodlit tennis court, a 24-rink green bowls court and mini golf. Enjoy some fine dining at the hotel’s varied theme nights and even a romantic candlelit dinner!

In the hotel spa there is a heated pool, saunas, steam bath, well equipped fitness room, and a hairdressing salon. A good choice of professional massages as well as facial and body treatments are available.

The stylish, contemporary beach side hotel with prompt service, expansive meeting and event facilities, supreme hospitality and service, a wealth of desirable dining options and hotel amenities, will appeal to families and business professionals alike. The artistic interiors add a lavish welcome atmosphere to the hotel; the parquet floor, the white marble, the elegant wooden furnishings, all create a homely atmosphere.

9,250 sq km (of which 3,355 sq km are in the Turkish Occupied Cypriot area) Situated at the northeastern end of the Mediterranean basin, Cyprus is the third largest island.

Greek and Turkish are the official languages. English is widely spoken.

The supply in Cyprus is 240 volts. Sockets are usually 13 amp, square-pin in most buildings.

Locally produced items, which are popular to visitors, include leather goods, woven goods, ceramics, copperware, handmade silverware and jewellery, baskets and the famous traditional hand-made Lefkaritika lace. Shoes, shirts, imported textiles, spectacles and watches are value for money. VAT ( Value Added Tax) is charged on the purchase of almost all goods and services. Foreign non-EU visitors to Cyprus can ask VAT refund on purchases over EUR100.

Gourmets will particularly appreciate what Cyprus has to offer, as Cyprus cuisine consists of dishes that are very rich in taste and unique in specialities. Within the very large range of Cypriot cuisine, the three favourites are: Meze", a rich collection of more than 20 different appetizers and savouries; "Tava", a lamb stew with plenty of onions and tomatoes and "Stifado", a stew of beef or hare, cooked with vinegar, onion and spices. The products of local marine aquaculture, seabream (tsipoura), seebass (lavraki) and prawns are becoming popular among the Cypriots and the tourists. Cyprus wines, famous in antiquity and throughout the Middle Ages, are becoming increasingly competitive in the International market

One can travel around Cyprus either by bus or by taxi or by rented car. There are Interurban buses (various bus companies link all major towns with daily routes at specified intervals), Rural buses (connecting villages with nearest towns), Urban buses (operate frequently during daytime in certain tourist areas).

Such as Interurban service taxi (shared with other passengers, provides connection between all major towns, every half hour). Other services include Rural taxis, Urban taxis (24 hours service provided in all towns).

Visas are issued by the Embassies and General Consulates of the Republic of Cyprus and additionally by the Cyprus High Commissions / Embassies.

Cyprus enjoys an intense Mediterranean climate, with long dry summers and mild winters, separated by short autumn and spring seasons. See the following chart that represents the months of the year and the number of days with rain and the average duration of sunshine per day:

In Cyprus, island, a 10% service charge is sometimes added to a restaurant bill; if not, then a tip of a similar percentage is expected. Taxi drivers and hotel porters always appreciate a small tip. Bargaining is not normally part of the shopping scene in Cyprus, neither in the North nor the South.

Banks in Cyprus exchange all major currencies in either cash or travellers cheques.

You will find ATMs in most towns and in most larger villages throughout the Republic of Cyprus.

Credit cards can be used in stores, restaurants, supermarkets and petrol stations. In the latter, you can even buy petrol after hours with your credit card from automatic dispensers.

Situated at the maritime crossroads of the eastern Mediterranean basin, Cyprus has a rich and varied history. Many invaders, settlers and immigrants have come here over the centuries, and the island has seen Greeks, Romans, Byzantines, Lusignans, Genoese, Venetians, Ottomans, British and Turks seek to take a part of Cyprus for themselves. Cypriots, whether Greek or Turkish, are proud of their nation and feel a strong sense of national identity. The division of their island in 1974 is viewed by many as a temporary setback, and Cypriots look to the day when Cyprus will be a united island once again. 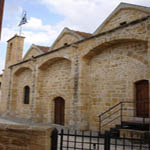 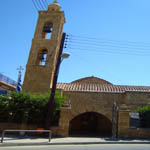 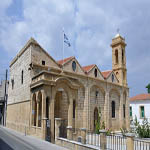 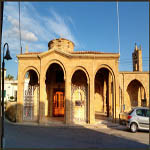 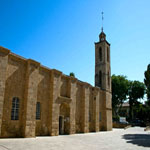